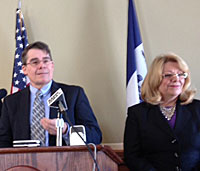 Late this morning a legislative panel will review Iowa DOT rules that would restrict the use of traffic enforcement cameras on state-maintained highways.

The rules could spell the end for traffic cameras on Interstate 380 in Cedar Rapids, on Interstate 29 in Sioux City and Interstate 235 in Des Moines if local officials cannot convince the DOT the cameras improve safety. Senate Democratic Leader Mike Gronstal is from Council Bluffs, where traffic enforcement cameras are installed along a busy city street.

“In my community traffic accidents in the past decade because of automated traffic enforcement have gone from 3800 to 700. They’re now back up maybe to 1100, but that’s still a two-thirds reduction in the number of crashes in Council Bluffs,” Gronstal says.

“I think the Department of Transportation has done an over-reach in terms of their rules,” Gronstal says. “I think they go too far.”

Gronstal argues legislators should make this decision, although he says in the past few years advocated who wanted to limit the fines from traffic enforcement cameras clashed with those seeking an out-right ban on the cameras.

Senate President Pam Jochum, a Democrat from Dubuque who serves on the committee that will review the DOT rules, favors “home rule” rather than the DOT’s approach to traffic cameras. “I understand the need to have some kind of consistency from county-to-county and city-to-city, but it still is a decision up to cities to decide whether or not they believe that is a public safety issue,” Jochum says.

DOT officials are scheduled to go before the Legislature’s Rules Review Committee at 11: 15 this morning to brief the panel on the rules. Legislators will then vote to either approve the rules or they could vote to delay them. That would give the legislature time to pass a bill that would overrule the DOT’s approach.