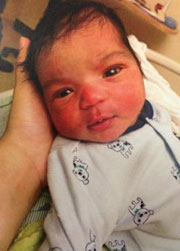 A six-day-old Wisconsin baby who was the focus of an intense search was found in Iowa today. Beloit, Wisconsin Police Chief Steve Kopp made the announcement at news conference. “Thank you for coming here today to help us celebrate the safe recovery of six-day-old Kayden Powell,” Kopp says.

The newborn was reported missing at around 4:30 on Thursday morning, reportedly taken from his home. Chief Kopp explained the details of the discovery of Powell. “At approximately 10:15 this morning, police chief Mike Horihan — West Branch, Iowa Police Department —  found Kayden in a tote bag swaddled in blankets at a gas station near Interstate 80,” Kopp explains.

Kopp says Powell is getting a medical evaluation before being reunited with his parents. G.B. Jones is the acting special agent in charge at the Milwaukee FBI office. “We are all very, very fortunate this baby is alive,” Jones says.  Jones says they worried about the baby since the very minute that 9-1-1 call came in. “We never stopped worrying, we never stopped giving up hope. And it’s cases like this — it’s days like today — that most of us do what we do,” Jones says. “We’re able to celebrate with you today the safe recover of this child. It’s miraculous.”

Despite frigid temperatures, the baby is doing “very well.” A person of interest in the case, Kristen Rose Smith of Denver, Colorado was arrested Thursday by West Branch police at another gas station across the street from where the baby was found. Smith is currently being held on an unrelated warrant out of Texas