You are here: Home / Crime / Courts / Burlington man arrested after run in with DCI agent at casino 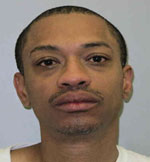 A Burlington man is facing several charges after allegedly trying to run over a DCI agent in the parking garage of the Catfish Bend Casino in Burlington. Special Agent Jeff Uhlmeyer says the agent normally assigned to the casino was called on the report that someone was breaking into cars and had stolen a vehicle.

Uhlmeyer says the agent found the man in a casino employee’s car and attempted to stop him. “He drove the car in the direction of our agent, that’s when our agent fired three shots at the subject,” Uhlmeyer says. He says the shots were on target as all three rounds struck the vehicle. But, the man was not hit and was able to get away after running into the DCI agent’s patrol car.

This all happened around nine o’clock Wednesday evening, and the suspect, 40-yearly David Cross was arrested today after a tip. “A resident of Burlington called in with some information that he provided to the Burlington Police Department, and we found the suspect in his car,” Uhlmeyer says. Cross was found sleeping in the back seat of the car and is now charged with interference with official acts, assault on a peace officer and operating a vehicle without the owner’s consent.

The DCI agent was not injured and has been placed on administrative leave while the shooting is investigated. The agent’s name has not yet been released.