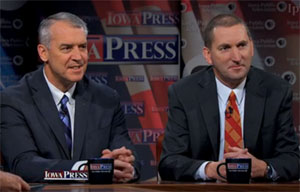 “Unionization? They’re not employees so I don’t believe that’s the right pathway to ultimately achieving, maybe, what some believe needs to be done,” Pollard says. “We’re all committed to the wellness of our student athletes and we continue to do a lot for that. That, unfortunately, probably doesn’t get talked about enough.”

Barta says the value of an athletic scholarship at the University of Iowa is in the range of $250,000 and Pollard says Iowa State is providing a “great internship” to student athletes who want the opportunity to “play beyond” college.

“But at the end of the day 450 student athletes — and they’re there, the bulk of them…for their education and we’re providing a debt-free education,” Pollard says. “And when you look at the other 33,000 other students on the Iowa State campus, many of them are working a part-time job, 20 hours a week, in order to pay their tuition, in order to fund their living expenses.”

Barta suggests a pay-to-play system would force schools to put a monetary value on the different levels of competition in all collegiate sports.

Barta and Pollard made their comments this morning during taping of this weekend’s “Iowa Press” program which will air on Iowa Public Television tonight at 7:30 and again on Sunday at noon. They discussed a number of topics, including the realignment of the Big 10 and Big 12 conferences. Pollard does not expect upheaval in the five major conferences in the “foreseeable future.”

“Our industry, over the last 50 years, has gone through cycles probably every 10 to 15 years,” Pollard said. “So I’m not going to say it’s not going to happen, but what we experienced three years or four years ago, where…that was the discussion every single day — that’s at least from my perspective, that’s not the discussions that are taking place at this point.”

Barta said teams like Penn State and Nebraska have been “wonderful” additions to the Big 10. Rutgers and Maryland will join the Big 10 this fall.

“The move further east — they’re like universities in many ways,” Barta said. “We still have a contiguous conference where all of our schools are along a path and we really just strengthened, now, where instead of Penn State being the easternmost, we went into that corridor of 60 million people.”

Expanding the potential television audience has affected the Big 10’s business “like it has many businesses,” according to Barta. Pollard said West Virginia rather than Louisville came to the Big 12 in 2011 because the Big 12’s television partner said “it wasn’t even close” and West Virginia was the better prospect.

The recent incident involving a Texas Tech fan and Oklahoma State basketball player Marcus Smart has been a topic of debate among sports fans. Pollard said a student athlete cannot do what Smart did in shoving a spectator, “but something triggered that” and there is “fault on both sides.”

“What the environment has started to become on the road for visiting teams unfortunately has probably gotten away from what we’d all think is acceptable, yet you look at movie lyrics, you look at song lyrics — it’s a tough issue,” Pollard said. “…We deal with it with students. You know if you asked any single one of them, they’d tell you that vulgar language isn’t really acceptable, but you put them in a ‘mob mentality’ in a game and you get what you get.”

Iowa men’s basketball coach Fran McCaffery was ejected from a recent game at Wisconsin after a confrontation with referees. During the IPTV program’s taping, Barta said he loves McCaffery’s “passion” for the game.

“Fran is a tremendous basketball coach and a great person. In that particular instance, he crossed a line that I don’t think was acceptable. He understands and agrees was not acceptable,” Barta said. “…His players love playing for him and I love having him as a basketball coach.”

Barta, the quarterback who led North Dakota State to three national titles in the 1980s, closed the program by saying college athletics is driven by a love of competition, just like it was when he played. Pollard, who was a long distance track star at Wisconsin-Oshkosh, added there’s “a passion” in society for college athletics.