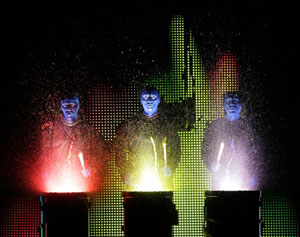 Some compare the experience of seeing the Blue Man Group in concert to meeting aliens from outer space, but  they’re all down-to-earth guys.

The multi-media performances feature three bald, blue men who take the audience on a rollicking journey.

The shows are different every night because of the audience interaction but Blue Man Brian Tavener says every show involves many of the same elements — revolving around pulsating music, elaborate instruments and plenty of brightly-colored paint.

Tavener says, “We like to combine science, technology, comedy, kind of an old school-style Vaudeville comedy with these three intelligent — but very innocent — beings encountering a society for the first time.” 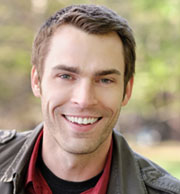 The 31-yearly North Carolina native has a background in acting and as a percussionist and says while there are lots of noises at the show, there’s no dialogue.

“We kind of speak through all of the universal languages,” Tavener says. “One of the big ones is rhythm, tribal drumming.”

Tavener says he doesn’t have to shave his head for the role. He uses a bald cap before he slathers on the signature blue grease paint.

That paint, he says, isn’t a problem for his skin. “Not at all,” Tavener says. “A lot of the guys say it’s like getting a facial every day, it’s actually cleansing, exfoliating. There’s a lot of jokes about people having tails and that sort of thing. We like to laugh — it seems to be a pretty healthy process.” He’s been one of the Blue Man men for almost seven years.

Tavener also writes, engineers and produces his own music as “Tav” on his own record label, Carrot Policeman Records. The Blue Man Group is performing eight shows next Tuesday through Sunday (Feb 18-23) at the Civic Center in Des Moines. This is the group’s only scheduled Iowa appearance on this tour.