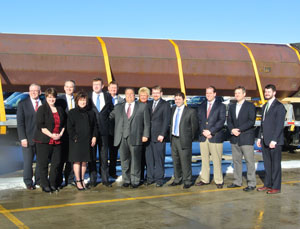 Representatives from Sabre and Clean Line in front of a tower.

A Sioux City tower manufacturer is partnering with a Texas-based company to build a 500-mile transmission line to carry electricity generated by Iowa wind turbines. The partnership between Sabre Industries and Clean Line Energy was announced this morning at Sabre’s plant.

Sabre president and CEO Peter Sandore says the project will help the company eventually expand its workforce from 269 to over 500 and generate millions of dollars with the new contract.

“We are looking at probably a project that’s going to be 100 to 150 million pounds of steel that’ll be used for this project,” Sabre says. He says that will require more people, more steel manufacturing, other processing of parts and materials. “All that being done, that’s going to help the economy in this state.” The poles for the project will cost around $120 million.

Hans Detweiler is the development director for Clean Line Energy. “The project starts in O’Brien County in northwest Iowa and then extends across Iowa to leave Iowa and enter Illinois just north of the Quad Cities, so it  exits in Scott County Iowa,” Detweiler  says. The line will spread another 120 miles across Illinois. Sabre will provide four to five poles for each mile of the 500-mile “Rock Island” route.

Detweiler says the line extends the availability of the Iowa power. “The purpose of the project is to allow the enormous untapped wind energy potential in the northwest Iowa and sort of great Siouxland region to be developed and to allow it to reach markets that are in Illinois and further east from there,” Detweiler says.

State economic development director, Debbi Durham, says wind power is another product Iowa to sell. “We need to look at wind as any other export. That’s really our role at this point now — is to really explain to Iowans why we believe this is an important infrastructure project that needs to occur,” Durham says. Land access rights are still being negotiated along parts of the proposed route. Construction would begin in mid 2015, with completion by late 2017.