You are here: Home / News / Blizzard watch issued for parts of the state Thursday 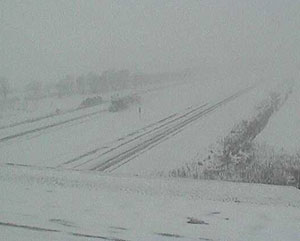 The National Weather Service has issued a Blizzard Watch for parts of the state Thursday. This shows the conditions during the snowstorm Tuesday in Waterloo..

Iowa’s rollercoaster winter promises another wild ride this week. Monday’s snowstorm was followed by a warm-up that’s bringing much of the state sunshine and highs in the 40s and 50s today, but another about-face is coming soon. Meteorologist Rod Donavon, at the National Weather Service, says there’s the potential for a blizzard on Thursday.

“We are expecting a band of snow to begin, rain changing to snow Wednesday night and then continuing into Thursday and that will be followed with very strong northwest winds,” Donavon says. “Certainly with the snow and the wind, conditions are favorable for blizzard-like conditions.”

While the current warm spell is melting a lot of snow, Donavon says we’ll soon be needing snowblowers and shovels again. A Blizzard Watch is in effect for 35 counties in central, northern and northeastern Iowa from 6 A.M. on Thursday to 6 A.M. on Friday. Cities included in the Blizzard Watch area include: Des Moines, Ames, Marshalltown, Waterloo, Fort Dodge and Mason City.

“We are expecting a heavy band of snow, generally along Interstate 35,” he says. “That corridor could certainly see three to seven inches of snow.” The forecast calls for even deeper snow in some areas of northern Iowa. Donavon says the wind will be a big concern. “The one thing to watch out for everybody is, the wind’s going to be light initially with this system, especially Thursday morning,” Donavon says. “Don’t be lulled into a false sense of security with that. We’ll be seeing the winds increase greatly by later in the morning and through Thursday afternoon.”

Wind gusts may be approaching 40 miles an hour, blowing snow and reducing visibility on roads. Skies should clear by Friday with forecast highs across much of Iowa in the 30s. Another chance of snow is expected for the weekend.