You are here: Home / Agriculture / Opponents of high-voltage transmission line gather at statehouse 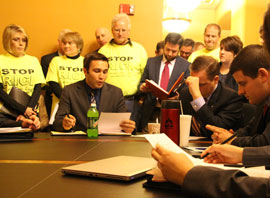 Opponents of a project to extend a high-voltage transmission line through Iowa gathered in Des Moines today to show their support for legislation that might give farmers a new pathway to fight the project. Carolyn Sheridan, a farmer from Greenville — which is near Spencer, is a spokeswoman for the group.

“We are opposed to Rock Island Clean Line high-voltage transmission line coming across the entire state of Iowa and leaving no electricity in the state,” Sheridan told Radio Iowa. “We’re mainly opposed to the use of eminent domain for these purposes.”

Sheridan and a few dozen others wore brightly-colored neon shirts to advertise their opposition to the project.

“They’re an attention getting device, of course, because when we come into the capitol we want to be seen as a group,” Sheridan said. “We want people to know there are a number of us and we are representing thousands of Iowans across the state.”

Sheridan said eminent domain authority will be used to seize a path for the power lines to pass through farm fields.

Eminent domain authority cannot be used for the placement of wind turbines, but it can be used for power lines and a bill  under consideration in the Iowa House would set up a new appeal process with the Iowa Utilities Board for high-voltage transmission lines that stretch for 200 or more miles.  More than five percent of landowners affected by eminent domain for such a project would have to sign a petition to start that proposed appeal.

Sheridan and the rest of her group attended the bill’s initial hearing today. She said the group hasn’t found “good answers” about whether the high-voltage line may cause health problems in humans and livestock nearby.

“Rock Island Clean Line will tell you that there’s no health effects,” Sheridan said. “We see lots of information that tells us that it’s inconclusive, so to us inconclusive means there needs to be more research, larger study sizes that would indeed give us better answers.”

On Monday a Sioux City-based company announced it will build the towers for the high-voltage lines and will nearly double its workforce because of the deal. Governor Terry Branstad’s economic development director was at Monday’s announcement, calling the transmission line “an important infrastructure project that needs to occur” because wind energy has the potential to be a growing Iowa export. Sheridan and her group were surprised by that.

“I think that as we move forward we see that there are a lot of different organizations and people across the state that don’t have a clear understanding of how this impacts farmers and landowners and that really eminent domain should not be used for economic development,” Sheridan said.

Developers of the 500-mile Rock Island Clean Line project have charted a preferred route that would start in northwest Iowa’s O’Brien County and exits on the east side of the state in Scott County, just north of the Quad Cities.