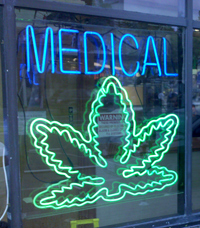 The federal government is trying to ease concerns of banking executives who fear doing business with state-licensed, legal marijuana-selling operations in Colorado and Washington state. Iowa Senator Chuck Grassley is criticizing the Obama administration effort, calling it “the wrong thing to do.”

Grassley says, “First of all, it’s wrong that we aren’t enforcing federal law, which if it were enforced, would negate the referendums that Colorado and Washington had.” The federal government regulates banks and federal law bans the sale and use of marijuana, still, the U.S. Treasury and the Department of Justice are prodding financial institutions to do business with legal marijuana companies.

Grassley, a past chairman of the Senate Finance Committee, says bank executives are right to steer clear of the pot-growing industry. “There is so much connected with the trafficking of drugs that involves the underworld and money laundering is such a big aspect of it,” Grassley says. “It seems to me it’s going to encourage drug kingpins to launder more money in a way they otherwise wouldn’t have the opportunity to do it.”

Marijuana sales are brisk in Colorado and Washington but those in the pot industry are having trouble getting bank accounts. Some businesses are being forced to pay bills in cash.