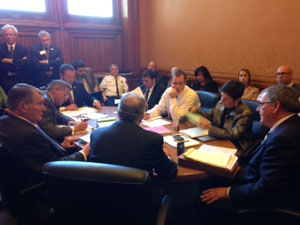 Legislators are considering an end to greyhound racing at the tracks attached to casinos in Council Bluffs and Dubuque.  Jim Carney, a lobbyist for Caesar’s which owns the Council Bluffs casino, calls the greyhound track an “albatross.”

“No one goes to the dog tracks,” Carney said during a hearing at the statehouse.

A bill approved today by a House committee calls on the two casinos to pay greyhound breeders and kennel owners $70 million over the next seven years to cushion the economic blow of ending greyhound racing in Iowa.

A different approach proposed by the greyhound industry would let the Iowa Greyhound Association try to find another facility in Iowa for dog racing.

Don Avenson, a lobbyist for the association, is asking legislators to preside over the looming “divorce settlement” between the two casinos and the greyhound industry.

“We’ll happily split the proceeds with the (casinos) because they are not going bankrupt,” Avenson said during a senate subcommittee hearing. “They continue to send tens of millions of dollars to Las Vegas.”

Jesus Aviles, the president of CEO of the Mystique Casino in Dubuque, told legislators he wants to work toward “consensus” on this issue.

“I’m not opposed to the divorce,” Aviles said. “I’m just opposed to being taken to the cleaners in the process.”

A Senate committee which could have considered the greyhound industry’s proposal late this afternoon did not do so. For the past six years bills to end greyhound racing in Iowa have failed to pass the legislature, but this year’s effort seems to be picking up steam after the city councils and economic development groups and other organizations in Council Bluffs and Dubuque lined up behind the move to close the tracks. Senator Rick Bertrand, a Republican from Sioux City, said during today’s hearing that as a young adult, he went to dog races at the Sodrac Park in North Sioux City.

“It was a good time. It was, but it’s a dying product,” Bertrand said. “There’s no doubt about it.”

“I think everyone in the state would recognize that the dog industry as has happened in many other states across the nation,” Mascher said during a House State Government Committee meeting this morning.

Iowa is one of just six states that still allow greyhound racing.  Some legislators are pressing the two casino managers to promise that greyhound track workers will not see significant pay cuts or a reduction in seniority if they decide to transfer to another job in the casino — if the tracks are closed. Representative Bruce Hunter, a Democrat from Des Moines, voted against the bill in committee for that reason alone.

A spokesman for the union that represents workers at the Dubuque track estimates those employees earn an average of between $17  and $18 an hour today and the jobs inside the casino pay between $5 and $10 an hour less.