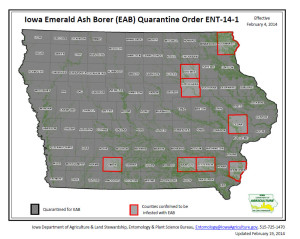 The State Agriculture Department has circled two more counties in red on the map it uses to track the spread of the emerald ash borer.

Department entomologist, Robin Pruisner says larva was delivered to them on the same day from two cities. “One was Waverly in Bremer County, and the second one from Eddyville in Wapello (County),” Pruisner says.

The insect that burrows into the ash tree and destroys them is now confirmed in eight of 99 counties. “I think what we have here is just more evidence of the ongoing march of this insect — probably facilitated by somebody moving firewood– is just continues spreading out across Iowa,” according to Pruisner.

Bremer County is located straight north of Black Hawk County, which was the last to be confirmed with an infestation of EAB earlier this month. Wapello County is straight west of Jefferson County, which was confirmed to have EAB in August of last year. A statewide ban on the movement of hardwood firewood, ash logs, wood chips and ash tree nursery stock was implemented after the find in Black Hawk County on February 4th.

Experts say the bug will eventually spread to all the counties, and that might make some wonder why they should bother taking precautions against moving firewood. Pruisner says the ban buys time. “That allows for landowners and municipalities to hopefully start to taking proactive movement her on dealing with their ash inventory if they want to start removing trees,” Pruisner explains, “so that it doesn’t have to all have to be done at the same time very quickly because the infestation moved so quickly.”

The ash borers are dormant now, but it’s a good time to spot trees that are infested. “People may not think about looking for an insect in wintertime — especially during polar vortexes — but the reality is that while we don’t have leaves on the trees, we get a clear unobstructed view of the branches and mainstem of a tree,” Pruisner says. “And when we start to see a lot of woodpecker damage on a tree, that means those woodpeckers are looking for lunch.” The lunch they are looking for is an emerald ash borer.

Pruisner says you can help by simply not moving wood around the state. “Firewood is an important resource for home heating, especially in times of high heating fuel prices,” Pruisner says. “But again, use common sense and keep that firewood local.”

The EAB infestation in Eddyville was found by a citizen who reported suspect ash trees to an Iowa DNR regional forester. A certified arborist hired by the City of Waverly to do a tree inventory discovered larvae in declining ash trees along two city streets. Other EAB infestations had been discovered in Allamakee County in May 2010, Des Moines County in July 2013 and Cedar County in October 2013.