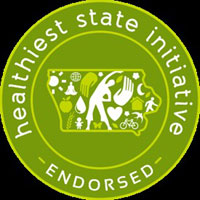 For the second year in a row, Iowa has placed among the top states in the country for well-being. Liz Cox, spokeswoman for the Iowa Healthiest State Initiative, says the Gallup-Healthways Well-Being Index measures key aspects of Americans’ lives — things like physical and emotional health, work environment, social and community factors, financial security, and access to necessities like food, shelter and health care.

“We are still in the top ten and we’re delighted about that,” Cox says. “This year, we do rank tenth and last year, we were ranked ninth. The really good news is, we’ve actually improved our score so, although our ranking slipped one point, our score has actually gone up and that’s the direction we want to go.”

While Iowa’s overall score on the survey rose, other states saw even more improvement. “Last year, our score was 68.1% on a scale of 100 and this year, we’re at 68.2, so we’re moving in the right direction,” Cox says. “A few states have scores a little higher than ours, but if you look at that ranking, it’s really a matter of tenths and we’re excited about a tenth.”

The top-ranked state is North Dakota with a score of 70.4 percent, which is only about two-percentage points better than Iowa. Colorado, Hawaii, Minnesota, Montana, Nebraska and Vermont are the only other states with back-to-back Top Ten rankings for the past two years. Of those seven states, only Iowa, Montana, Nebraska and Vermont have shown improvement in their overall well-being score each year since 2010.

“There are initiatives happening all around the country to improve health and well-being and we’re not the only ones paying attention,” Cox says. “Other states are doing similar action and, yes, it’s good for our country that some of these states are moving up the ladder as well.”

In the first two years of the survey, Iowa moved from 19th to 16th nationally and has now been in the top ten the past two years. The Blue Zones Project in Iowa represents the largest community well-being improvement initiative ever launched. It’s based on principles gathered from places around the world where people live longer, happier and more productive lives with lower rates of chronic disease and a higher quality of life.

More than 150,000 Iowans have pledged their support for the Blue Zones Project. Learn more at: www.bluezones.com or www.iowahealthieststate.com.