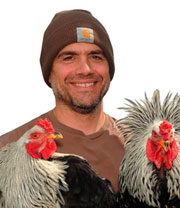 A best-selling author and midwestern humorist will make one stop in Iowa this week on his latest national tour. Michael Perry’s talk is entitled, “Stories from the Middle of Nowhere,” and he notes, nowhere is sometimes the very best place to be.

The 49-yearly Perry grew up on a dairy farm in Wisconsin and put himself through nursing school while working as a ranch hand in Wyoming. “The conversation I had with my dad, the farmer, about when I told him I wanted to be a nurse, he said, ‘I think you’ll make a fine nurse. Your mother’s a nurse. It’s a noble profession,’ and then he did say, ‘But I do want to be there when they pin that little white cap on you.'”

While he’s sold millions of books, Perry insists he’s not a famous writer. He lives with his wife and two daughters in rural Wisconsin, where he serves on the local volunteer fire and rescue service and is an amateur pig farmer. He hosts the nationally-syndicated “Tent Show Radio.”

Most people who live in California have no idea what a Midwestern blizzard is like, Perry says, so when he’s speaking on the West Coast, he tries to put things in perspective for them. Perry says, “If you’re ever in a Walmart parking lot in January in Wisconsin and it’s 20-below and a complete stranger walks up to you and says, ‘Can you jump me?’, you should not get your hopes up. That’s about a dead battery situation, not a dating situation.”

Perry says writing does not come naturally to him and calls it a “happy accident” he’s a writer at all. Despite his appearance on the New York Times bestseller list five times, he says he really struggles with the craft of writing and sometimes will literally cut up pieces of paper and paste them on the wall to suss out a storyline. “I only know how to go about things one way and that’s how my dad did it,” Perry says. “He was a farmer and he just got up every morning and did the chores. I just get up every day and work at the writing. I tell people, I learned everything I ever needed to know about making a living as a writer by cleaning my dad’s calf pens and that is, you just keep shoveling until you’ve got a pile so high, someone has to notice it.”

His bestselling memoirs include: “Population 485,” “Truck: A Love Story,” “Coop,” “From the Top” and “Visiting Tom.” He has recorded three live humor albums including: “Never Stand Behind A Sneezing Cow” and “The Clodhopper Monologues.”

Perry will appear on Friday at 7:30 P.M. at the Temple Theater in Des Moines. For details, visit Perry’s website: www.sneezingcow.com