You are here: Home / Fires/Accidents/Disasters / DOT expects to get roadways back to normal today for most of state 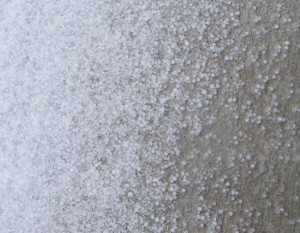 Thursday’s storm packed a little bit of everything, including this hail in Des Moines.

Thursday’s storm threw a little bit of everything at the state and local crews trying to keep the roads clear.

Iowa Department of Transportation maintenance engineer, Bob Younie says things went pretty well considering the  multidimensional storm. “We had rain, we had snow, we had ice, we had a lot of different things,” Younie says. “You know the public actually did a really good job of driving during the storm to minimize incidents. And if the public just has a little more patience — today I think we are going to get pretty much back to normal in most of the state.”

The DOT took the unusual step of closing I-35 between Highway 30 around Ames north to Highway 18 after blowing snow led to several wrecks. “Interstate 35 into northern Iowa has always been kinds of a problem child for us if you will.  It’s just so wide open and the snow blows so much that it creates a problem,” he says.  Younie says the interstate is usually one of the safer roadways in normal winter conditions. “We really kind of hate to close it because of that fact that it is such as safe system,” Younie says. “But there’s times when we just can’t allow people to drive when we have the incidents that we have.”

A couple of the truck stops along I-35 reported hundreds of big rigs pulled over and parked during the storm. The winter has caused the DOT to use a lot of time and material to treat and clear the roadways, but Younie believes they have enough to finish out the season.