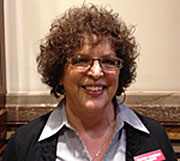 Access to the Iowa House and Senate is decided by a group of people who’ve been known as “doormen” for years, but with two recent additions to their ranks, the term “doorkeeper” is being used more often.

All of these gate-keepers have retired from other careers since it’s a job that lasts only during the four or five months when the Iowa legislature is meeting in Des Moines.  Sharon Kimberlin heard about the job of senate doorkeeper through a friend who has worked in the statehouse and Kimberlin decided she had the people skills to do the work.

“I have been a self-employed cosmetologist my whole life, so I’ve been around the public, so this really kind of fits into that,” she says.

Doorkeepers wind up being a liaison between the legislators and members of the public, who go to the statehouse to see their representatives and senators. Doorkeepers like Kimberlin who are stationed at the front door of the senate literally pass notes between the public and legislators, often helping to arrange a face-to-face meeting. While public perception of politicians, in general, is negative these days, Kimberlin has a positive impression of her new bosses.

“Everyone has been so super nice,” she says. “That means a lot to me because they could just pass you buy and you’re just a fixture. You’re there. You’re doing what you’re supposed to do, but they really make an effort and that’s really nice.”

Kimberlin, who will turn 70 in March, is from Des Moines, but she had never been inside the statehouse until she interviewed for the job. Now, as a doorkeeper, she is sometimes a bit of a “bouncer” — deciding who gets inside the ornate chamber where senators debate and where each has a desk and a secretary. 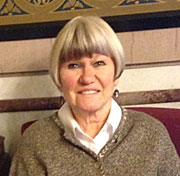 “It is absolutely the most beautiful, fabulous building,” she says.

Kimberlin is one of six full-time doorkeepers. Seventy-four-year-old Linda Flaherty — a retired clinical psychologist — was hired as a senate doorkeeper last year. Her post is at a side door where lobbyists pass notes to senators.

Flaherty and Kimberlin are not the first women to hold the role of senate doorkeeper, but there have not been women among the doorkeepers’ ranks for a several years until Flaherty’s hire last year.