You are here: Home / Military / Branstad says Biden a potential ally in fight against cuts to Guard 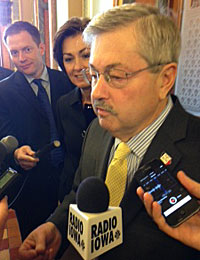 Governor Terry Branstad is asking President Obama to spare National Guard units from the Pentagon’s budget cutting plans. Branstad was in Washington, D.C. yesterday for National Governors Association meetings and he said today there is “bipartisan resistence” from governors to the idea of “substantial” cuts to the Guard.

“Since 9/11, we’ve seen a major increase in the military, especially in the Army,” Branstad told reporters in Des Moines. “The National Guard numbers have stayed about the same, and yet the Guard has been deployed again and again.”

“We think that is dangerous to our national defense,” Branstad said, “and we think it hurts us, as governors — commanders in chief of our state National Guard — of being able to protect the homeland when we have natural disasters and emergencies in our given states.”

Branstad brought the issue up Monday during a meeting the governors had with President Obama — and Branstad believes he’s found an ally in the Obama Administration.

“Vice President Biden came up to me afterwards and said: ‘I will be giving you a call within the next week,'” Branstad told reporters today. “He’s got a son in the National Guard and I think he understands how critical this is and so I’m hopeful that we can get some movement and some change.”

Branstad, co-chair of the group of governors who’ve been tapped to be advisors to the Pentagon, met with U.S. Defense Secretary Chuck Hagel and other key Pentagon officials.

“I think they knew going into the meeting yesterday afternoon at four o’clock that they had a lot of unhappy governors. Secretary Hagel was very apologetic and indicated a willingness to really try to rebuild the relationship and the consultative process,” Branstad said. “But I think the governors are skeptical and say, ‘We’ll see.’ We hope that’s true.”

Hagel, a Republican, is a former U.S. Senator from Nebraska who is a Vietnam veteran. Branstad told reporters he’s proud Iowa’s entire congressional delegation — both Republicans and Democrats — have lined up in opposition to proposed cuts to the Guard.