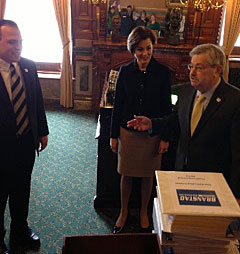 Governor Terry Branstad and his campaign staff delivered more than 10,000 petition signatures to the Iowa secretary of state this morning — more than double the number required to place Branstad’s name on the June 3, 2014 GOP Primary ballot.

Secretary of State Matt Schultz told reporters his staff will review the petitions to verify the signatures, but there’s no doubt Branstad has surpassed the roughly 3,600 he needed. “I think it’s pretty clear he’s got it,” Schultz said, laughing, as he stood with Branstad and Lieutenant Governor Kim Reynolds near the pile of documents.

Branstad has run for office a dozen times — including five previous campaigns for governor.  He said this may be the largest number of petition signatures he’s ever collected.

“We’ve always been people that believe you don’t take any chances and you be sure that you’ve got more than an adequate number of signatures,” Branstad told reporters.

“Some people are in a better position to give time and work at signatures. Other people have financial resources, but they don’t have a lot of time,” Branstad said. “Some people have both, so if you can do both, we really appreciate that, but if you really have the time and are willing to put in the time and get signatures and help us with the campaign, that’s critically important, but it also takes money and we appreciate those who write checks as well.”

The number of signatures required for nominating petitions for each party is based on a percentage of the votes cast for that party’s candidate in the last presidential election.  Branstad had to get the signatures and addresses of at least 3654 Iowans from at least 10 different counties in order to qualify for June’s Republican Primary.  To qualify for the Democratic Primary ballot, a candidate like state Senator Jack Hatch has to collect over 4000 petition signatures and addresses, since Barack Obama got more votes in Iowa in 2012 than Mitt Romney did.