You are here: Home / Human Interest / Group says wages not keeping up with cost of living 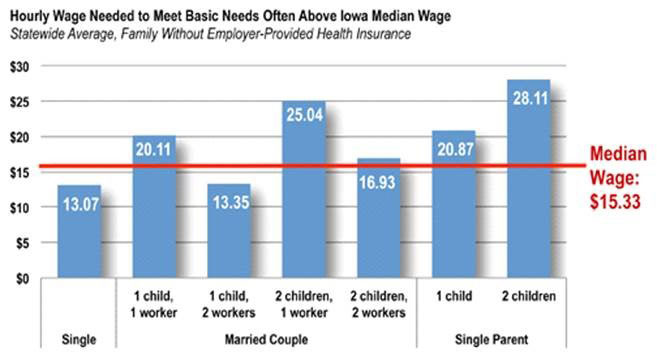 A new report from an Iowa City based research organization shows many families in Iowa cannot afford to make ends meet.

Peter Fisher, lead author of the report from the Iowa Policy Project, says the cost of living in Iowa has increased significantly since the last report on the issue in 2012.

“Two years ago, we were able say that because of the recession, inflation had pretty much been held in check in many areas. That’s not been the case recently,” Fisher says. “Food costs, depending on the family, have gone up between 8 and 15 percent. The state average cost of child care for preschoolers has gone up 13 to 16 percent.”

According to the report, rent has increased between 8 and 13 percent and the cost of owning a vehicle has risen by roughly 6 percent. Fisher says, for most families, the wage that’s needed from a job to cover those “basic needs” is substantially above the median wage offered in Iowa. “In other words, you’d have to be in a job paying above and sometimes well above what over half of the jobs in Iowa pay,” Fisher says.

Lily French, who helped prepare the IPP report, says after accounting for expenses like childcare, transportation, and rent, Iowans have to earn 1.63 to 3 times the federal poverty line to make ends meet. “There’s a significant disconnect between the measurements the federal government uses to describe the number of people who are struggling, they also use that number to help determine policies and programs to help fill in the gap for people,” French says.

The gap was even more significant for workers who do not receive health insurance through their employer. A single parent in that scenario would have to earn nearly $21 an hour to support just one child, according to the analysis. The “Cost of Living in Iowa” is available on the IPP website: www.iowapolicyproject.org.