You are here: Home / News / Dancers from across the country swing into Des Moines 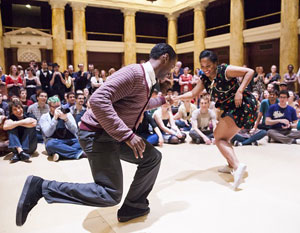 We’ve heard plenty lately about the emerald ash borer, but make way for the jitterbug! For the fourth year, central Iowa is hosting the region’s largest swing dance competition, bringing in some of the country’s top Lindy Hoppers.

The swing weekend will take place at several venues around downtown Des Moines, offering live music, performances, contests, and more than 40 classes for dancers of all ages and ability levels. As for the competitions, Brafford says they’ll be dancing what’s known as the Lindy Hop. “It started in the late 1920s, right around when Charles Lindbergh flew across the Atlantic Ocean,” Brafford says. “This is the style of dance that was very popular in the ballrooms, it came out of the Savoy Ballroom in New York. From there, World War Two kind of spread it across the world and it was really popular in the 30s and 40s.”

While most of the competitors will be in their 20s, some are in their teens and others will be older — into their 60s and 70s. Brafford says it’s a real treat to have such a diverse group of people on the same dance floor doing the same moves and having so much fun. “Absolutely, and it’s great to see them all together,” Brafford says. “The older dancers inspire the younger dancers and it’s great to talk to them, hearing their stories of what it was like back in the day.”

Brafford lives in the Twin Cities but wanted to bring this event to a more central location — his hometown of Des Moines. He’s 34 and learned to dance while he was a student at the University of Iowa. The events run today through Sunday. Some of the dances go until 4 A.M. For more information, visit: www.heartlandswingfestival.com