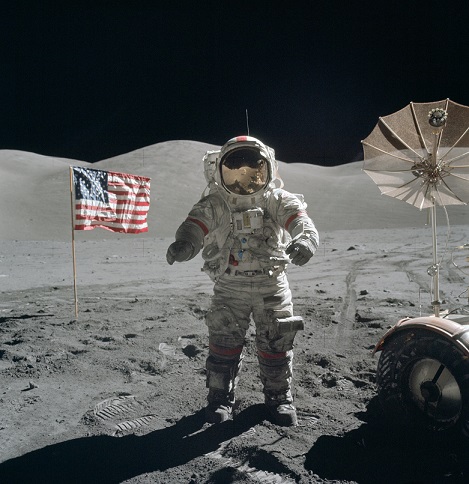 The last man to walk on the moon will be in Iowa this week, talking about his experiences as commander of Apollo 17 and hoping to inspire young people to pursue spaceflight themselves.

It’s been more than 40 years since Gene Cernan left the moon and the U.S. has no immediate plan to return, send people to Mars or do anything beyond low earth orbit. Still, the 79-year-old remains optimistic America’s love affair with exploring the final frontier isn’t over.

In a telephone interview with Radio Iowa, Cernan recalled his three missions as an astronaut, including Apollo 10. On that adventure in May of 1969, Cernan took the lunar module or LEM to within 50,000 feet of the moon’s surface to test out its many complicated, unique systems.

He says he never felt slighted on that mission because they didn’t go all the way down to the moon — they were never supposed to do so. Cernan says he used to joke with Neil Armstrong — the first man to step foot on the moon on the next mission, Apollo 11 — that he “painted the white line in the sky so he wouldn’t get lost.”

“Number one, we did find some troubles in the LEM, particularly in the landing radar which probably would have kept Neil from landing and indeed, he had some troubles of his own with the computer, but we were able to overcome them,” Cernan says. “Looking back at history, how can you fault the decisions that were made?”

While saying he has no regrets about his long career, Cernan admits there was one thing about his final Apollo 17 mission that he wished he’d done differently: he wanted to take a picture of something special for his then-nine-year-old girl, Tracy, while he was on the moon.

“I did indeed put my daughter’s initials in the sand,” Cernan says. “It was an afterthought as I parked the rover. I just decided to scribble her initials, I don’t know why. At that point in time, I didn’t have a camera to take a picture of them. I didn’t realize what a big deal it was going to be. I thought it was just going to be a little secret between her and me.”

The camera was also not handy to take a picture of his last boot print in the moon dust. He says he climbed up the ladder and looked back and realized, it was all over too quickly. 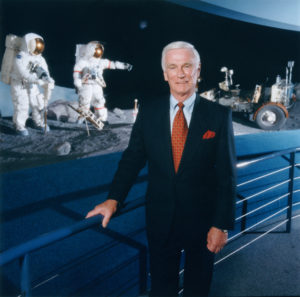 “I wanted to capture the essence of the moment,” Cernan says. “There was the earth, a quarter-million miles away, beautiful blues of the oceans, the whites of the snow and the clouds, surrounded by the blackest black you can conceive. I was going to leave all that. I wanted to stay. I wasn’t done. I don’t know what I was going to do but I wasn’t done.”

China landed a robotic rover on the moon in December, what’s believed to be that nation’s next step toward sending people there. Cernan believes the Chinese will likely beat the U-S back to the moon, but he remains hopeful about the human race continuing to explore.

“Some young boy, some young girl with that indomitable will and courage indeed will take us back, and not just finish the job but extend our reach as human beings into learning what we don’t know about ourselves, who we are, where do we come from,” Cernan says. “There’s just a wealth of information and knowledge we have yet to learn. We just can’t turn in upon ourselves and be satisfied with who we are, where we are. We need to expand our horizons.”

As he approaches his 80th birthday, Cernan says he’s had decades to reflect on a successful career and a lifetime of accomplishments. He was asked if there’s anything that’s still on his “bucket list” which he still wants to check off.

“The most important things in my life today, and it’s taken a long time to realize that, are family, friends and having enough time left on this planet to enjoy them,” Cernan says. “That’s what’s in my bucket.”

Cernan will give a lecture on Thursday at Des Moines Area Community College’s West Des Moines campus. The talk is free and open to the public.

Read Part 2 of the story HERE.