You are here: Home / Fires/Accidents/Disasters / Freezing temperatures cause problems for firefighters in Sioux City 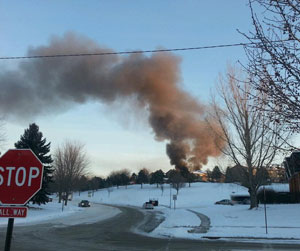 Smoke from an apartment fire in Sioux City.

It was a lose-lose situation in Sioux City this morning where firefighters tried to douse a fast-moving apartment building fire but met obstacle after obstacle — including the bitter cold, slick surfaces and at least two dead fire hydrants.

Fire crews were called to the Glen Oaks Apartments about 6:45 A.M. and city fire marshal Mark Aesoph says the problems began within minutes.

“The first units arrived and found fire on the second floor of the three-story apartment building,” Aesoph says. “The first crews were able to advance a hose line into the apartment where the fire originated. They were making headway on the fire when the first hydrant that was secured was not working. This forced those crews to back out of the apartment.”

While water had been coming from that first hydrant, the flow just stopped. Firefighters hooked up a longer hose to a second hydrant and couldn’t get any water from it at all.

Pumper trucks were called in, hauling water to use. It’s unclear if the hydrants were frozen, shut off or if there was an unknown water main break somewhere.

With temperatures well below zero in Sioux City this morning, the scene of the fire became very slick, resulting in a fireman getting hurt. “We did have one firefighter that slipped and fell from a ladder approximately three stories, 30 feet to the ground,” Aesoph says. “He was transported to Mercy Medical Center. He’s undergoing some tests. It appears the injuries are not very severe.”

All residents were safely evacuated. The fire spread to a dozen apartments and gutted all twelve units. Several other apartments had smoke and water damage. Firefighters used a city bus to warm themselves as they dealt with double-digits below zero temperatures.

The Siouxland Chapter of the American Red Cross is helping the displaced victims of the fire, among them, Brandon Harvey and his family. Harvey says he was up early.  “All of the sudden the alarm goes off and I’m walking around the apartment complex and nobody’s getting out and I don’t see flames, I don’t see smoke,” Harvey says. “It reminds me of the college days when people pull pranks. Then, I go back inside and wake up my wife and debate should we take the kids out and stand in the cold and then people started knocking on doors and that’s how we knew.”

Harvey, his wife and children escaped with their clothes and little else. “They’re in their pajamas,” he says. “I hope I grabbed enough diapers to get them through the morning.” Harvey says his family will staying with friends for now.

Opportunities Unlimited is providing its facility to use as a staging area for residents to meet with the Red Cross to get help.