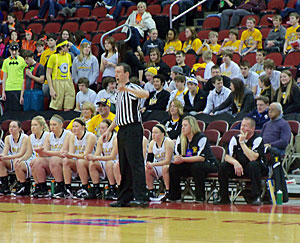 Janesville players and coaches watch the action on the court.

Janesville pulled away in the 3rd quarter and held off every rally by Rockford to win 58-46 in a class 1A quarterfinal at the girls’ state basketball tournament.

Wildcat coach Steve Chidester  says there were some butterflies early on. “You know, I think anybody is nervous in a state tournament, I think we all were a little bit nervous, but I thought we settled down pretty quickly and  just played our game,”Chidester says.

Janesville had some trouble early with Rockford’s press, but were able to handle it late once they had a double-digit lead. Chidester says they weren’t supposed to dribble as much and they may’ve been doing that because they were nervous. “After we got used to what was going on out there, I thought the girls handled it pretty well,” he says. 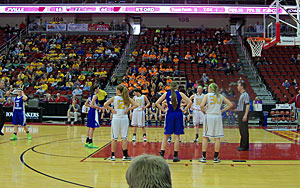 Janesville downed Rockford 58-46 in a Class 1A first round game.

It’s the Wildcat’s first state basketball appearance but many of  players were on the state championship volleyball team this year, and senior guard Brittany Hanson, says that tournament experience helped them to focus. “Yeah it does, getting that experience in from other sports helps us go into every game knowing you’ve got to put everything out there and can’t take anything for granted,” Hanson says.

Janesville got a three-pointer right before the half, from Hanson. She says it helped them heading into the lockerroom. “It gave us a lot of momentum going into the second half,” Hanson says.

Janesville moves on to the semifinals on Thursday with a 24-1 record.  They will play Burlington Notre Dame at 10 a.m.