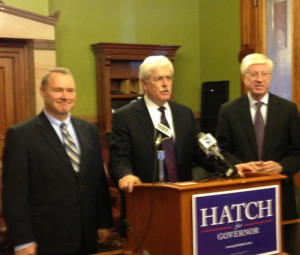 Two long-time Democratic elected officials in Iowa have endorsed Democrat Jack Hatch’s bid for governor, stressing Hatch’s work in the private sector as well as his work in the Iowa legislature.

No other current state attorney general in the United States has served longer than 69-year-old Tom Miller, who also endorsed Hatch today.

“You know you don’t think of liberal Democrats as successful businessmen, but that’s a very nice combinaton, I would think. Certainly is working well for Jack,” Miller said, laughing. “But it work well for the state, too, to have someone who believes in his kind of beliefs, but also has a great deal of business sense and accomplishment.”

Hatch, who is 63, has served in the Iowa legislature for nearly two decades.

“This is really an extraordinary day for to be endorsed by two gentlemen who, combined, bring over 70 years of public service to the state,” Hatch said.

Hatch and his wife have developed $100 million worth of residential and commercial property in Des Moines and Cedar Rapids.

“If we’re going to present (an) opportunity for Iowans to choose between myself and Governor Branstad, I bring a real knowledge of the entrepreneurial spirit,” Hatch said. “We built this company from nothing. We created an opportunity for people to live in decent housing in two areas of the cities that normally are forgotten.”

Hatch hopes to face-off in November against Republican Terry Branstad, who is seeking a sixth term as governor.