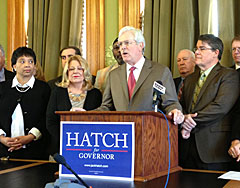 “Today’s the 4th of March and March is the only month that is also a command,” Hatch said, “so we’re asking this governor to give the order. Ask the legislature: ‘March forth and raise the minimum wage.'”

Senate Democratic Leader Mike Gronstal of Council Bluffs has said the senate won’t debate a bill that would raise the minimum wage, however, unless there are Republicans in the senate who would support it.

“They have not responded to our entreaties,” Gronstal said this morning.

Gronstal and Hatch were joined at today’s event by about two dozen Democrats from the Iowa House and Senate, including Representative Bruce Hunter of Des Moines.

“For almost 300,000 Iowans, Iowans who work hard, who play by the rules and do what is right, there really isn’t any dignity,” Hunter said. “For those people working at or around Iowa’s current $7.25 minimum wage, there’s only poverty.”

Governor Branstad signed a bill in 1989 that raised Iowa’s minimum wage above the national rate.  A spokesman for Branstad’s 2014 reelection campaign issued a written statement, but did not say whether Branstad supports or opposes the minimum wage hike.

In 2007, Democratic Governor Chet Culver signed legislation that raised Iowa’s minimum wage to $7.25)an hour — above the national rate, but congress later that year voted to raise the national rate to that level.

(This story was updated at 10:52 a.m. with additional information.)