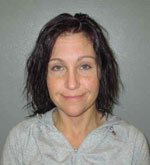 The mother of Lyric Cook-Morrissey, one of two children abducted in Evansdale in 2012 and later found dead, is in jail again after being arrested a second time in Fayette County.

Thirty-seven-year-old Misty Morrissey is accused of violating her pre-trial release after being busted on drug charges late last year.

Morrissey was arrested in November for allegedly selling illegal drugs from her home in West Union. Following her arrest, Morrissey was released on pre-trial probation. On Monday, authorities revoked her pre-trial release, alleging several violations. Among them was the continued use of illegal drugs.

The drug charges from her November arrest are still pending. On July 13th, 2012, Morrissey’s  daughter and niece — Lyric Cook-Morrissey and Elizabeth Collins — disappeared while riding their bicycles in Evansdale. The girls’ bodies were found in a remote area of Bremer County nearly five months later. Their abduction and murders remains unsolved.