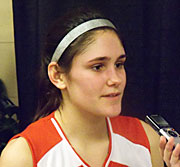 Ballard overcame a five point halftime deficit to down Davenport Assumption 55-45 in the opening Class 4A quarterfinal of the day at the girls’ state tournament in Des Moines..

Ballard coach, Kelley Anderson says they had to make some adjustments after getting beat on the boards in the first half. “We talked about that pretty heavily at halftime, they had 9 offensive rebounds at halftime and we weren’t doing what needed to be done,” Anderson says. “They all stepped it up, they listen to what we were saying…and they came out and got it done.”

He says they needed to adjust their attitude. “We talk about being mentally tough all the time, and they were more mentally tough in the first half,” Anderson says. Davenport Assumption was trying to become just the second team to win four straight championships.  They won the last three in class 3A before moving into the class 4A field this season. Anderson says they did bring it up several times and the fact that they are a great program and that Ballard has had some great games with Assumption at the tournament through the years.

Sophomore Meridith Ossian came off the bench to score 19 points for the Bombers.  Ossian says they were aware of the Assumption tradition. “We knew it was going to be a tough game, we scouted them hard and we came out and did what we needed to do,” Ossian says. She normally averages around 3 points, but said things were working well in this game. “I took what they gave me and my teammates found me when I was open, and it worked out,:” she says.

Assumption senior Kennedy King says,”I just think nerves got the best of us, a lot of us it was our first time coming and we weren’t really prepared for their outside shooters.”

King was pleased with what they accomplished given the pressure on them to try to win a fourth straight title. “We had a huge target on our backs all season and people were doubting us because we lost so many great players last year. I think it’s amazing that we made it this far with a whole new team, a new coaching staff, and it was just very successful for the circumstances,” King says.

Davenport Assumption finishes the season at 17-7, Ballard advances to the semifinals on Thursday.