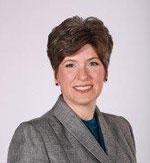 Ernst is among a half dozen Republicans vying for their party’s nomination to run in the fall against Congressman Bruce Braley, the only Democrat in the race. University of Iowa professor Tim Hagle says there are two ways to look at Romney’s endorsement.

“On the one hand I suppose in a sort of joking way, this might make Clovis and Whitaker happy,” Hagle says.

That would be Sam Clovis and Matt Whitaker  — two of the other candidates in the race, but Hagle says Romney could be considered a “good get” for Ernst, too.

“Certainly right now Mitt Romney’s stock, so to speak, is going up because of a revisiting of (his) comments on Russia being our number one geopolitical enemy,” Hagle says.

Romney lent his name to an Ernst fundraising email that was sent out this morning and Hagle says Ernst needs that fundraising help because another competitor in the race — retired businessman Mark Jacobs — is using his personal wealth to bankroll his race.

“Everybody but Jacobs, really, has been struggling to a certain extent in terms of fundraising, which then makes it difficult for them to do mailers or television ads or what have you,” Hagle says.

Ernst backed Romney’s bids for the White House in 2008 and 2012. Romney, in that fundraising email, called Ernst a “proven conservative” who can help Iowa Republicans win a senate seat that has been in the hands of Democrat Tom Harkin for three decades.