You are here: Home / Sports / Hudson advances to championship in 2A 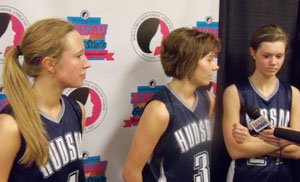 Fourth-ranked Hudson overcame a sluggish start to down unbeaten and second-ranked Cascade 45-33 in a Class 2A semifinal at the girls’s state tournement.

The Pirates led 4-2 after the first quarter and Hudson senior guard, Casey Miles, says it was a combination of things. “A little bit of nerves — a little bit of we were  kind of jacked up — but we cam back and took care of business,” Miles says.

Hudson advances to the championship game tomorrow night,  “It’s indescribable,” Miles says, “I mean, we’ve been dreaming about this since we were little, but we never thought it would be a reality.”  She says the emotion of moving on left them not knowing how to act. “It was crazy — we didn’t know how to celebrate  in all honsesty — we just kind of sat in the shower and meditated and then went crazy. We didn’t know what to do,” Miles says. 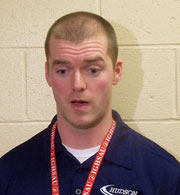 Hudson coach Jake Liekweg says they thought it might be a game that was a little slower paced. “We we expecting to be lower scoring, not as low as it was. We were hoping to get the score up to the more mid 60’s, we knew if we could do that we would have a pretty good shot, ” Liekweg says.

“Tough one, no doubt about it, Hudson made plays, especially in the fourth quarter,” Cascade coach, Mike Sconsa said.  “I don’t think they wanted it any more than us, it’s just that old cliche’ that they just made more shots and made more plays. We didn’t shoot well, but our kids fought,” Sconsa says. “Give Hudson credit, they made shots they made plays,  they beat us. That’s the way it goes.”  Cascade  end sthe year at 26-1. Hudson is 25-1 and moves on to face Western Christian in the 2A championship Friday at 8 p.m.