You are here: Home / News / State marks 80 years in the liquor business 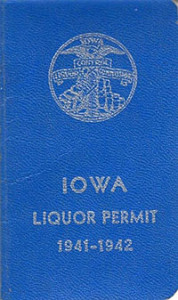 Saturday marked the 80th year the State of Iowa has now been in the liquor business. Iowa Alcoholic Beverages Division spokesperson Tonya Dusold says national prohibition was repealed on December 5th 1933, and the state created the Liquor Control Commission on March 8th of 1934.

“At that time the control states were formed and Iowa and 18 other jurisdictions chose direct involvement to control the trafficking of alcohol within their respective borders,” according to Dusold. “The 21st Amendment, which repealed prohibition, gave the states to right to control alcohol however they saw fit within their own borders.”

Dusold says Iowa chose “direct control” for a couple of reasons. One eason was prevention and social responsibility and what products are available in the state. “There are some more dangerous products out there that we don’t allow to come through the system. It also ensures proper taxation. Alcohol is a big revenue generator for the State of Iowa,” Dusold says.

The state set a record with around $256-million in sales and a record $119.5-million in revenue in the last fiscal year that ended in June.

Dusold says they did try to get a tally on the amount of alcohol sold in the 80 years. “The estimation is 266.3 million gallon of spirits have been sold in the State of Iowa since the repeal of Prohibition,” Dusold says. “That does not include gallons of wine or beer.”

You can now buy hard liquor at convenience stores and grocery stores and a host of other places. But it was much harder to buy a bottle when the state first started selling spirits in 1934, as there were only five state liquor stores. “One in Des Moines, Marshalltown, Mason City, Atlantic and Oelwein. And those were for a period of time the only places you could buy spirits in the state,” Dusold explains.

What had become known as the “Beer and Liquor Control Department” was replaced by the current Alcoholic Beverages Division in 1986. The state then decided to focus on the wholesale business, and got out of the retail sale of liquor. “In 1987, the 221 state retail liquor stores at the time were closed, and 410 licensed private outlets opened,” Dusold says.

The ABD transferred over $100-million  to the general fund of the state for the first time in 2009, and has done so every year since then. Dusold says the numbers in the last fiscal year averaged out to Iowans drinking about 2.7 gallons of spirits, 2.3 gallons of wine and 33.5 gallons of beer for each individual of legal drinking age.