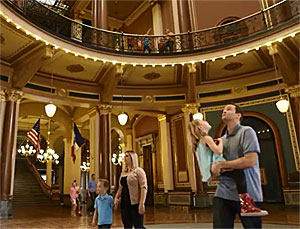 One of the new tourism ads shows visitors to the state capitol building.

The State of Iowa is spending $1.5 million on television ads that began airing in Chicago, Minneapolis, Omaha and Kansas City last week, touting Iowa as a tourist destination for families.

The ads are also popping up on websites like Expedia and Google. The message encourages would-be Iowa tourists to visit the revamped www.traveliowa.com.

“We’ve been working hard over the last few years to really optimize our website,” says Shawna Lode, head of the Iowa Tourism Office. “Instead of giving people lists of all of the places, all of the hotels, all of the restaurants, all of the campgrounds — we’re still giving them lists, but we’re trying to add content to our website that really is inspirational.”

The ads (watch them here and here) target areas that are within driving distance of Iowa and Governor Terry Branstad says it’s important to “show off our state…and encourage our neighbors to visit.”  Branstad plans to make a stop in each of Iowa’s 99 counties during calendar year 2014, but he’s leaving this Friday for a weeklong family vacation in Arizona.

“Probably we should have done it earlier this year when it was really cold, but obviously now it looks like spring,” Branstad told reporters, laughing as he added:  “I saw a guy wearing shorts last night at the movie theater — in Iowa on the 10th of March!”

Branstad and his wife saw “Non-Stop” — an action movie.