You are here: Home / Military / Iowa Air Guard ahead of schedule with transition to drones

One year after learning they’d be moving from manned fighter jets to unmanned drones, leaders of the 132nd Fighter Wing of the Iowa Air National Guard in Des Moines say they are on schedule to complete the transition early. Wing Vice Commander, Colonel Kevin Heer says the initial disappointment in losing the F-16 fighters has moved to excitement about the new mission.

He spoke with the media about the progress and says it’s been one of the busiest years they ever had. “We’ve done basically 20 years of training in about six months.  What we would normally retrain our people and train new recruits, we’ve had to compress that within a very short timeline to get people ready to go and out the door to these training schools,” Heer says. 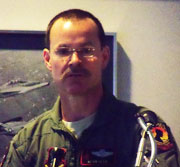 The pilots and maintenance crews are training to fly the M-Q-9 Reaper by remote control as well as learning how to deal with the intelligence gathered by the aircraft. Heer says the ended up losing around 30 of the 600 personnel that worked with the F-16’s.

They set up a committee to look over what they needed for the new mission and that resulted in a lot of shifting and moving of people. “Four-hundred and four personnel that have been placed into new or existing mission positions. We’ve had 76 transfers, which was exciting. Seventy-within the Iowa Air National Guard, but 25 of those transfers are within the Iowa National Guard here. So, we kept that talent and were able to use those people’s skills in other organizations,” Heer says. “And then we’ve had about 24 retirements — which is about normal for us — and then 25 separations this year.”

Heer says they were scheduled to start the new mission at the end of 2016, but they expect to be ready a year ahead of schedule. Operations group commander, Colonel Shawn Ford, says you won’t see drones parked at the Des Moines airport once they get the operation underway. He says the remote pilots in Des Moines take control after the craft is airborne. “Climb in, get a handoff with the M-Q-9 that’s over in theater — whatever that theatre may be anywhere in the world,” Ford says. “Run the mission from here, and when it’s time for that aircraft to land, we hand it back off to the launch and recovery element.” 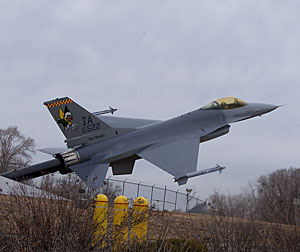 This display is the only remaining Iowa F-16 at the air base in Des Moines.

Ford says getting in all the training is the only thing holding them back at this point. “We are converting along with four other units — so you add in 30 some pilots per unit that need to get trained —    there just aren’t the number of slots available to get everybody through training that we need. So, that’s just going to take us some time,” Ford says.  The guard is planning renovations to three buildings to handle the needs of the new mission, and to save money by now requiring all new buildings.

The construction on the building that will be used for the initial operations is expected to begin in two to three months.

“Right now we’re at the 35-percent design phase on that building. What that really means is, we’ve decided where the walls are going to go and where all the office space needs to be,” Ford explains. “And from that it’s just getting the details put into that plan — where’s the electrical going to get run, where are they gonna put come, what kind of HVAC system do we need.”

The total cost of the new facilities is around $18-million.