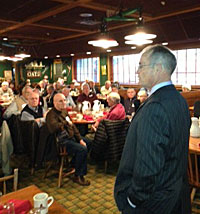 Danny Carroll speaks at an event this morning.

A former legislator who is seeking the job of chairman of the Iowa GOP says focusing on offense rather than defense will help quell the “gossip mill” currently being fueled by feuding factions in the party.

This past weekend the party’s current chairman, A.J. Spiker, announced he’s stepping down to take a job in Kentucky Senator Rand Paul’s political organization. Party co-chair Danny Carroll plans to seek the party’s top post when the Iowa GOP’s state central committee meets at the end of the month to elect a new chair.

“I’m reasonably confident,” Carroll told reporters this morning. “Obviously I won the co-chair vote by a slim majorit of 9-8 and so if those same votes are still there on March 29th, I should be O.K.”

Carroll spoke this morning at the Westside Conservative Breakfast Club and he offered this advice when asked how he would unite the party: “Whenver there is conflict in any organization — family, church, business…the first thing we do is we start gossipping…We could stop gossipping and we could stop saying mean things about other people, particularly other Republicans, and a bunch of you — you could help do that right now.”

Carroll, who is from Grinnell, is currently a lobbyist for The Family Leader, a conservative Christian organization, and he served eight years in the Iowa House.

AUDIO of Carroll’s speech at the Westside Conservative Club

Carroll told this morning’s crowd it’s time for the GOP to go on offense.

“Perhaps the state leadership in the Republican Party could shut down the gossip mill a little bit and not look for people to blame,” Carroll said. “…I’ve got some ideas, some things that we could be for and you know when you start pulling together and aiming at a goal, pretty soon gossip is less, the blame is less. Why? Because we’ve got an objective. We’ve got a job. We’ve got a goal, a direction.”

If Carroll wins the job of party chairman later this month, he plans to seek the job again this summer after the party’s state convention when new members may be elected to the GOP’s governing board — the state central committee. Carroll would  like to continue the controversial Iowa Straw Poll in Ames in 2015, but he’d to “make sure it doesn’t get too out of bounds” by charging candidates exorbitant rent for space at the venue and setting ticket prices too high.

“You know it’s important in the Caucus that everybody have a shot at making their case in Iowa. If you make the Straw Poll too expensive, then you rule out some people, but still I think it serves an important early function,” Carroll told reporters. “It is a straw poll. It’s not a final thing, but it gives people something to aim at, the candidates, so yes, I’d like to see it continue, but to be run reasonably.”

Governor Terry Branstad has said the straw poll should go.  Carroll did not support Branstad’s bid for a fifth term in 2010, but Carroll recently said their relationship now is “cordial” and he supports Branstad’s bid for a sixth term in 2014, although the two have not talked about Carroll taking a new leadership role in the party.  Carroll said his main concerns, if he does win the new job, will be the U.S. Senate race and the third district congressional race. Both have crowded fields of candidates and if none of the candidates emerges with 35 percent of the vote in June’s primary, the party will have to hold conventions to select a nominee.