You are here: Home / Military / Iowa Air Guard experts add upgrades to F-16’s from other states 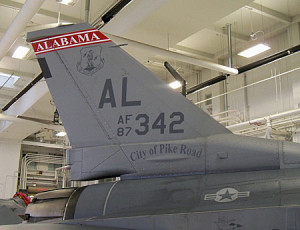 Tail markings on an F-16 under repair in Des Moines.

The last F-16’s carrying an Iowa logo flew out of the Air National Guard base at the Des Moines airport last fall. But a program now underway has Iowa Guard technicians using their years of experience on jets from other states.

Staff sergeant, Eric Johansen, is one of the Iowans replacing old analog systems with a new electronic display in the cockpits of F-16’s from Alabama. “It’ll give them the information that they need so that they know their airspeed, their direction, any targets that are in the area,” Johansen explains. “They can look on the screen for targeting with their systems, they can look at infrared, they can look at their target system, so they can see on-screen live what’s going on.”

New visual display for an F-16.

The new electronics will also the pilots to use what’s called a helmet-mounted integrated targeting system. “It’s a monocle that goes over their right eye and they’re able to see a target and what’s going on in relationship to their heads up display as well,” Johansen says. 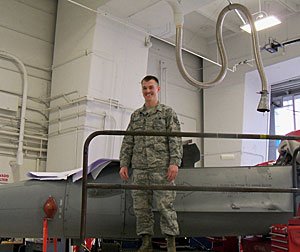 They have already finished 17 upgrades and have three more in progress in the hanger. The planes were built in 1986 and 1987. “You know, you’ve got a 27-year old jet and we’re trying to modify it so that it’s up-to-date with today’s current technologies,” Johansen says. He says while they can’t make the jet brand new, the electronics are similar to those used in the newest F-22 fighter and increase the capabilities of the F-16.

The call the upgrade process the “Speedline” as it gets the job done relatively quickly. “It takes us approximately three weeks from the beginning of the jet landing to starting tear down, to running all the tests that we have to do to ensure the safety of flight as well as the workmanship of all of the equipment that we install,” Johansen says. “It’s about two to three days of taking off panels, removing equipment.” 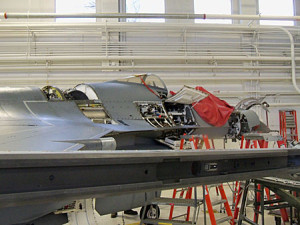 The rest of the time is spent installing the new equipment. Johansen says the pilots normally fly in a few jets, then take out and test the ones that have completed. There are also still some F-16 pilots from Iowa can test the repairs if needed.

Johansen says electronics sometimes fail, but he says the new equipment holds up very well. “It doesn’t happen very often, and they are a very sound piece of equipment once you get off the ground and fly around at Mach speed,” Johansen says.

The Speedline operation will continue through September when Iowa Guard leaders say  Johansen and others will need to leave the maintenance work to train for the new drone missions.