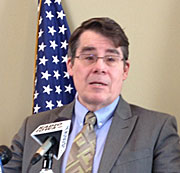 The top Democrat in the legislature is blasting a group of Republicans for abandoning an effort to get Iowa school buildings tested for radon.

Last week the Iowa Senate passed a bill that required districts to have school buildings tested by 2025, but a House committee this week changed the bill so it only requires the Department of Education to survey schools to find out if radon tests are being done.  Senate Democratic Leader Mike Gronstal of Council Bluffs calls that a “disappointing” development.

“Radon is from bedrock. Iowa as a state, just by luck of the draw (with) deep soil depths, is a perfect place to collect radon in basements,” Gronstal says. “That’s just a reality of nature and putting our head in the sand about it and saying, ‘We’re not even going to look to see if there’s a problem,’ I think is a stunning dereliction of duty.”

School officials say there’s no room in school budgets for the equipment needed to rid schools of radon if tests show there are unacceptably high levels. House Republicans working on the issue side with the schools and argue the new survey would find out if schools need more money from the state to buy the equipment that reduces radon levels. Senator Gronstal says schools should “at least” test for radon.

“This state is the worst in the country, just by the luck of the draw, in terms of the amount of radon that leaks into buildings,” Gronstal says. “If you’re going to be responsible, you should test, then deal with the problems that test reveals, but putting your head in the sand just means more people will die of lung cancer.”

Gronstal says the radon-related bill, although altered, at least survived the legislature’s deadline this week for policy-related bills, so discussions on the issue can continue. House Speaker Kraig Paulsen of Hiawatha, the legislature’s top Republicans, told reporters today he doesn’t know what debate the House committee had about the issue.