You are here: Home / News / Democrat Hatch files paperwork to run for governor 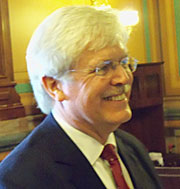 Democrat state senator, Jack Hatch of Des Moines, filed the signatures needed today at the Secretary of State’s office to get on the ballot in the race for governor.

Hatch admits Republican Governor Terry Branstad is more well known — but says he will use the eight months leading up to the election to spread his message. “Getting my ideas out there, have a dialogue with more Iowans that can focus on me and the governor.  And I think that by the end, we’ll raise enough money, we’ll be on television and all the media outlets to be able to compete very strongly,” Hatch says.

Hatch says the governor has been part of the “strong right-wing bickering” in the state and Iowans are ready for a change.

“It’s always a battle for the middle. We talk about the every day Iowans,” Hatch says. “They get up every morning, they work hard, they take care of their family, the recreate in the state, they worship in the state. They don’t want the meddling of government in their lives. They want to improve their lives.”

Today was the deadline to file the signatures to get on the ballot. Governor Branstad submitted his petition signatures on February 25th.