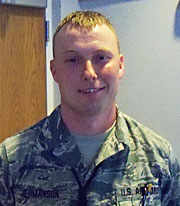 The change in mission for the Iowa Air National Guard in Des Moines will have them flying unmanned aircraft, but it will also include experts who interpret intelligence information. Master Sergeant, Jake Hermanson, was a mechanic on the F-16’s that were phased out before choosing the new career as a Geospatial Intelligence Analyst.

He explains his job. “Converting raw information into usable intelligence and then understanding how to best weaponeer against a specific military target,” Hermanson explains. The raw information he uses is taken from many sources. “Imagery from all sorts of different resources — national level resources as well as military resources —    satellites, full motion videos. But mainly imagery,” Hermanson says. “And then best understanding how to destroy that target, that military target.”

Hermanson had to undergo new training for this job to be able to identify the things he’s looking for. “There’s a lot of concealment from enemies of ours. They’ll conceal and create falsification targets and we have to decipher whether that is a valid military target. Maybe it’s just an inflatable balloon,” Hermanson says.

He could be looking at information from the drones flown by Iowa pilots, or other sources. “There’s really two forms, time sensitive and then long range planning. And we’ll be working both types of stuff,” Hermanson says. “Our overall mission or goal is to convert raw information into credible intelligence and supply that the war fighter across the globe as well as our current national leadership to benefit our overall national security and our overall national strategy.”

There are some aspects of his job that he can’t talk about. “Oh yeah, yeah, there’s a lot more to it than what I can tell you today in an unclassified environment,” Hermanson says.  Hermanson says the move to the new mission has been good thus far. “There’s a lot of good opportunities that can come from this change to this organization — not only for myself and my family — but for the local community and the state. And we need the support and the push and the drive from them in order to make us successful,” Hermanson says. “I guarantee you that we will be successful, but we just need the help of those supporting agencies and the federal government to get us to where we wanna go.” Hermanson talked this week during a media day that came one year after the 132nd Fighter Wing in Des Moines learned it would be changing its mission.