You are here: Home / Sports / Hawkeyes look to make most of NCAA tourney bid 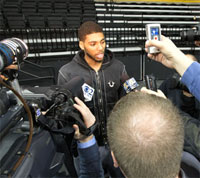 The Iowa Hawkeyes won’t have much time to prepare as they open the NCAA Tournament on Wednesday night in Dayton, Ohio, when they take on Tennessee. It is Iowa’s first trip to the big dance since 2006 and it is the fourth time coach Fran McCaffery has turned a losing program into an NCAA Tournament team.

“You started to see it come together in year one, in year two we made a little bit of noise, and last year we were sitting right on the bubble and a little disappointed, and now we are in,” McCaffery says. “It’s a great accomplishment. I’m thrilled for our seniors and really excited about the opportunity.”

McCaffery took over an Iowa program that finished 10-22 in 2010, including 4-14 in the Big Ten. “This particular journey has been unique. It has been rewarding because some days in the beginning it seemed insurmountable,” McCaffery says.

McCaffery’s 13-year-old son Patrick is scheduled to have surgery on Wednesday to remove a tumor on his thyroid. The coach hopes to be with his son but plans on being at the game and is working on a plan to fly back for the surgery and then to the game.

Senior guard Roy Devyn Marble says he is not satisfied by just getting to the tournament. “I still want to go deep in the tournament, as far as possible of course,” Marble says. He believes they have the team that can do that if they get back on track. Marble says the Hawks look to get things turned around after losing six of their final seven games and says everyone is excited at learning they made the tournament “And I’m definitely going to make the most of it.”

Junior forward Aaron White says the Hawks are thrilled to be in. “These guys have worked so hard since they got here — especially the seniors. From where we’ve come to where we are,” White says. “I know people are frustrated with how the season ended, none-the-less we are in and I look forward to the opportunity.”