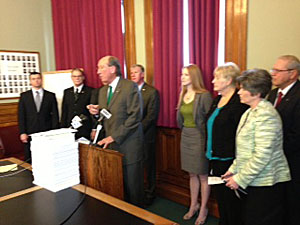 Republicans are asking for a vote in the legislature to ban tele-med abortions.

Republicans in the Iowa Senate are calling on the Senate’s Democrats to help advance a bill that would ban so-called tele-med abortions — and key Democrats, in return, say they won’t join what they call the GOP’s “war on women.”  Senator Amy Sinclair, a Republican from Allerton, says that’s offensive.

“Trying to protect the life and well-being of women by banning a procedure that doesn’t even meet a humane standard of care is a war on women? Seriously?” Sinclair said during a statehouse news conference. “Honestly, that statement doesn’t even deserve an intelligent response.”

The Iowa Board of Medicine voted last year to forbid doctors from remotely dispensing abortion-inducing drugs via a video-conferencing system. Planned Parenthood of the Heartland has challenged that decision in court, so the ban has not taken effect. In February, the Republican-led Iowa House voted to ban telemedicine abortions and Senator David Johnson, a Republican from Ocheyedan, said there are Democrats in the senate who would vote to ban tele-med abortions, although he’s not naming names.

“We know that this is not health care because we don’t hear from that third person in this decision and that’s the unborn child,” Johnson said during today’s news conference.

The House bill to ban tele-med abortions is not eligible for senate debate, as it did not clear a senate committee by last Friday’s deadline. Therefore, it would require the drafting of another bill — cosponsored by the Republican and Democratic leaders of the senate — to have the senate consider the issue. Senator Joe Bolkcom, a Democrat from Iowa City, issued a written statement, saying the ban denies rural women access to “affordable, safe” abortion services.