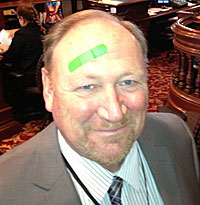 Several members of the Iowa Senate are sporting a green BAND-AID over their right eye today as a show of support for Iowa State basketball player Georges Niang on St. Patrick’s Day. Niang had five stitches over his right eye Saturday night after taking a charge — and an elbow to the head — near the end of the Cyclone game against Kansas.

Senator Tim Kapucian of Keystone is an ISU graduate who is wearing one of those green BAND-AIDs.

Senator Mark Segebart of Vail said he watched Saturday’s ISU game against Baylor on TV and saw a lot of people in the crowd wearing a BAND-AID in solidarity with Niang. 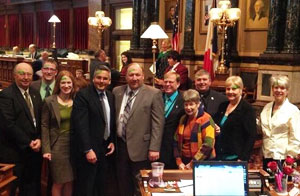 “Please join me in putting on your green band-aid over your right eye,” Segebart said in the Senate this afternoon.

Segebart, who is an ISU graduate, then approached the president of the Iowa Senate — Senator Pam Jochum of Dubuque, a graduate of Loras College — and asked if she’d wear a BAND-AID on her forehead, too.

“Now, I’ve been pinned before, but never band-aided before,” Jochum quipped, as senators laughed.

Jochum did accept the BAND-AID and is wearing it over her right eye this afternoon.