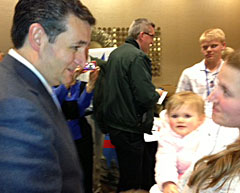 “I think we ought to be pursuing every possible policy to expand the option for parents and for kids,” Cruz told reporters immediately after his speech.

Cruz told the crowd of hundreds of children and their home-schooling parents that they have a “fundamental right” to educate their children and they must “guard against efforts to undermine” their new-found freedoms.

A 2013 Iowa law erased previous requirements that parents who intend to teach their children at home notify their local public school district and file lesson plans with the school.  Cruz said he is a “passionate fan” of school choice as well — allowing parents to send their children to the school of their choice, not just to the school in the district in which they live.

“For too long, we’ve been hearing that solutions will come in time, in decades,  and yet one generation after another of kids are left without good options,” Cruz said. “We need to have the urgency that, frankly, we would have if it were our kids trapped in schools.” 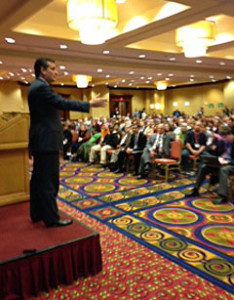 Cruz is “emphatically opposed” to the so-called “common core.” Supporters say is an effort to ensure students are competent in essential subjects like math and science. Cruz sides with those who say it will wind up being a federal take-over of education.

“I don’t think the federal government has any role dictating the content of curricula. I think education is a state issue and a local issue and ideally at the local level because that way parents can have direct input and control of what’s being taught to their kids,” Cruz told reporters. “If you or I disagree with what some bureaucrat in the federal Department of Education says, you can’t change that. You don’t have an influence on that.”

Cruz just recently finished second in the Conservative Political Action Conference straw poll gauging interest in the field Republicans likely to run for president in 2016. He is due to speak in Mason City this evening at a Cerro Gordo County GOP fundraiser.  This is the first-term senator’s fourth visit to Iowa in less than a year.

Democrats organized a conference call with reporters a few hours before Cruz made his public appearance in Des Moines.  Democratic National Committee chairwoman Debbie Wasserman-Schultz called Cruz the “new face” of the GOP.

“The Tea Party has clearly had a strangle-hold over the Republican agenda and Ted Cruz has been driving that agenda,” Wasserman-Schultz said.