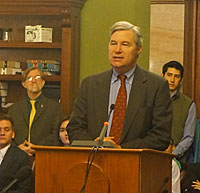 A Rhode Island Senator is in Iowa today, urging Iowans to push the next crop of presidential candidates to address climate change. Senator Sheldon Whitehouse has a series of public events today in Iowa, including a stop this morning at the statehouse.

“I want to lay the groundwork so that when Iowa is the political epicenter of the universe in 2015 we’re putting the candidates on the spot and Iowa is contributing towards the success of solving their problem then,” Whitehouse said.

While the senator’s last name is “Whitehouse,” he told reporters he is “definitely not”  running for the White House himself.

“I think we have a terrific candidate in Hillary Clinton,” Whitehouse said. “I supported her last time and I’m going to support her again and I’m here on a completely different mission.”

According to Whitehouse, there is “an extremely good chance” the U.S. Senate will be able to pass legislation to address carbon-based pollution.

“The clearest thing we need to do is put a price on carbon so that the price of carbon matches the cost of carbon to the world,” Whitehouse said.

Whitehouse told reporters 10 Republican senators appeared willing a few years ago to support that kind of approach, but Whitehouse said those senators have been cowed by the coal, oil and gas industries.

“The biggest challenge in pushing legislation in Washington is the colossal barricade of lies and special interest money that has been built around the capitol,” Whitehouse said. “…This is not an up-and-up debate with legitimate arguments on both sides. This is a propaganda effort paid for by the polluting industry on one side and a bunch of scientists and people who actually know what they’re talking about on the other side.”

Whitehouse spoke to a crowd over over 200 at the statehouse this morning. He’ll host a “business forum” in downtown Des Moines later this afternoon. Businesses understand the “reality” of climate change, according to Whitehouse and he aims to get businesses to convince the public that climate change is really happening.

“The denier machinery is very unified. In fact, although it has many faces, it’s basically all the same beast and it’s paid for by virtually all the same money,” Whitehouse said. “And on the other side you have all of these other corporations and organizations that have other interests. This isn’t their prime interest to convince the American public of this, so trying to get a coordinated message out of them is the task we have.”

Whitehouse is due to speak in Des Moines this evening at the Izaak Walton League.