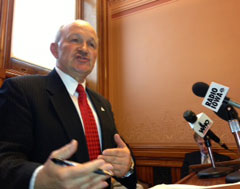 A state senator is accusing one of Governor Branstad’s top administrators of trying to tilt unemployment compensation decisions in favor of businesses. Senator Bill Dotzler, a Democrat from Waterloo, is questioning the actions of Iowa Workforce Development director Teresa Wahlert.

“Enough is enough and it’s time for her to go,” Dotzler said today during a statehouse news conference.

Dotzler said Wahlert fired the administrative law judge in charge of the 14 lawyers who judge unemployment disputes, set herself up as their manager and then demanded the judges come up with “tip sheets” that would help businesses win their cases.

“The director has crossed a line,” Dotzler said, “…and put herself directly as a supervisor of these administrative law judges which is clearly in violation of labor laws.”

Dotzler is asking the U.S. Department of Labor to investigate.

“I’m deeply concerned that there’ll be retaliation against these administration law judges and I’m serving notice on the director to leave them alone,” Dotzler told reporters this afternoon. “According to federal law, they are supposed to be isolated and they shouldn’t receive undue influence from this director whether it’s real or perceived and I want to tell you something: it is real.”

“So if you can deny benefits to workers that they are entitled to, the Unemployment Trust Fund is probably a little higher and employers and companies don’t have to put as much into it,” Dotzler said. “You know it’s a clear bias toward working men and women in this state and it’s time it’s over with.”

The Workforce Development agency issued a written statement, saying a team of U.S. Labor Department investors made a “routine monitoring visit” last August and found the agency was reducing its backlog of cases involving unemployment compensation disputes. The agency’s director referred to “process improvements” within the unit which she said have led to “a better experience for our customers.” That includes what Wahlert characterized as “clarified rules” but she did not directly address Dotzler’s charge that she asked for tip sheets for businesses facing an unemployment compensation case or tallies on how the administrative law judges were deciding cases.

“Sen. Dotzler’s engagement in Washington, D.C.-style partisan attacks has no place in Iowa,” Branstad spokesman Jimmy Centers said in a written statement. “The taxpayers expect their elected leaders to work in a bipartisan fashion to pass meaningful legislation, not engage in Senate Democrats’ petty political theater.”