You are here: Home / Fires/Accidents/Disasters / Red Crosss offers app to help you deal with flooding 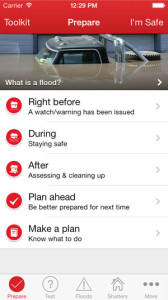 The Red Cross app helps you deal with flooding.

As part of National Flood Awareness Week, the American Red Cross is offering a free flood app for smart phones.

Liz Dorland, spokeswoman for the Red Cross chapter in Omaha/Council Bluffs, says the app offers a lot of useful tools in real-time, including letting you know if there’s potential flood danger nearby.

Floods are the most common natural disaster in the United States and Dorland says the app can help you be better informed and prepared. “There are facts and quizzes so you can test your knowledge about flooding,” she says. “Did you know that just six inches of swiftly-moving water can sweep you off your feet and just two feet of water can displace your car so your car can float down a street?”

The app also has a one-touch “I’m safe” message that allows users to send a message out, letting family and friends know they are out of harms way. It can also let you know about nearby Red Cross shelters and real-time recovery resources for returning home and cleaning up. Dorland says the free flood app is available at the Apple App Store and at Google Play.