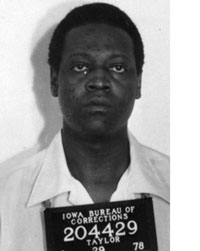 The man who was sent to prison for killing two Waterloo police officers in 1981 has died. James “T-Bone” Taylor was 60.

Captain Tim Pillack had been on the force three years and was a patrolman on July 12th, the day 27-year-old officer Wayne Rice and 28-year-old officer Michael Hoing were shot and killed by Taylor.  “That was a pretty traumatic day for the Waterloo Police Department and for the city of Waterloo,” Pillack says. “Obviously, the shootings — and of course the whole next week looking for T-Bone Taylor and being involved in the funerals of the officers — was a busy week for everybody.”

The shootings came after the two officers answered a call about a loud party and a confrontation developed where Taylor took Rice’s gun and killed  both men. Pillack says the search for Taylor was massive. “Several hundred officers, we had officers from all across the state of Iowa looking for T-Bone Taylor,” according to Pillack.

Pillack was assigned to search near La Porte City southeast of Waterloo where Taylor was eventually found five days later in a bean field. He had been hiding for a couple of days in a vacant house. “It was a feeling of relief just from the simple fact that all the officers involved had been putting in a lot of hours, and we were concerned for the safety of the community. And we wanted to bring him to justice,” Pillack says.

The five-day search was tense for the entire community and led to the death of Black Hawk County Sheriff’s Deputy William Mullikin. Mullikin died in an accident on the way to a call about shots fired in the search area. “To lose three officers from Black Hawk County in one week was very traumatic for the whole State of Iowa and obviously for the families and the fellow officers,” Pillack says.

Pillack was asked about his thoughts when he learned that Taylor had died. “Whenever the subject of the death of Wayne Rice and Michael Hoing comes up, it’s always a time to just sit back and think about what happened that day and what happened that week. And it just brings up the old memories — not only for the police officers, but for the families,” Pillack says.

The Waterloo Department honors Rice and Hoing with a ceremony each year. They are the last two Waterloo officers to die in the line of duty.

Another link to the Taylor case — retired state trooper Marv Messerschmidt, who found Taylor in the bean field — died this month. Messerschmidt was 82.