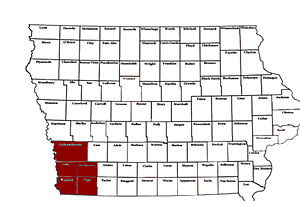 The red counties in southwest Iowa all have instituted burn bans.

Fremont County in the southwest corner of the state became the first to institute a burn ban Tuesday. The nearby Mills, Montgomery, Page and Pottawattamie counties followed Fremont’s lead and implemented the bans Wednesday.

Ron Humphrey, a special agent in the State Fire Marshal’s office, says local fire and emergency management leaders make the decision on issuing a ban based on various conditions. “The general ones are just the dryness of the conditions, wind conditions, I suppose there are several other things they look at,” Humphrey says.

Spring begins today and Humphrey says it’s one of the prime times for counties to decide on a burn ban. “This time of year all the vegetation is dried up and dead, and without the snow on the ground to give it the moisture to keep it damp, this time of year is about when we start to see these burn bans,” Humphrey says. “And of course it’s a windy time of year too. And once a fire does get going, it can spread pretty rapidly given the conditions.”

The counties not only determine when to institute a burn ban, they also decide how restrictive those bans will be. “Usually it doesn’t mean that burning is completely banned. It may be a permitting process during these times where you have to get a permit (to burn) — or other steps. Like I said, that’s county-dependent on how they set up their ban,” Humphrey says.

You should check with local officials to see the restrictions on burning if your county is under a ban. You can find a list of the burning bans on the State Fire Marshal’s website.