You are here: Home / Crime / Courts / Police frustrated by lack of information in Hampton man’s disappearance 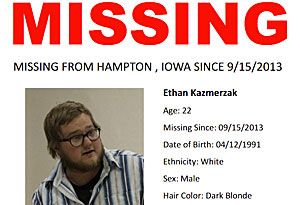 It has been a little over six months now since a young man from north-central Iowa vanished and investigators are discouraged as the trail’s gone cold. Twenty-two-year-old Ethan Kazmerzak of Hampton was last seen on September 15, 2013.

Hampton Police Chief Bob Schaefer says there were several leads, initially. “We followed up on those and those did not produce anything,” Chief Schaefer says. “We still have a car missing and we still have Ethan missing. We just don’t know what to do.”

Kazmerzak was described as having: dark blonde hair, a beard, glasses and he had a Grateful Dead tattoo on his upper left arm. He was 5-foot-5 and 185 pounds. He was driving a silver 2006 Volkswagen Jetta TDI with Iowa license plate number AUZ 382. Schaefer says the $20,000 reward is still being offered, but it may not be a permanent reward. “I can’t say that for sure but there is no end date on it,” Schaefer says. “It’s whenever the group of people decides that okay, we’re going to end this here.”

The chief says the lack of progress in the search for Ethan is frustrating but he remains hopeful. “There’s a lot of people in the state of Iowa, unfortunately, that go missing and have never been found,” Schaefer says. “We just hope that’s not the case with Ethan, hoping that if he’s alive, that he does come back home and if he’s not, that somewhere along the line we get information to locate where he is.”

Police say his cell phone was last used on Septemper 15th near Hampton and his ATM card has not been used since September 14th. To contribute any information to the case, call the North Iowa Crime Stoppers at 800-383-0088 or the Hampton Police Department at (641) 456-2529.