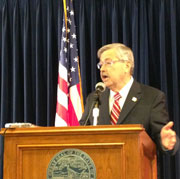 Governor Terry Branstad says “confidential settlements” with state workers who’re being dismissed are wrong and he’s issued an executive order to make it clear they are not to happen again.

“Confidentiality provisions that prevent disclosure of agreements are wrong and I am deeply disappointed that they were ever considered, let alone used,” Branstad says.

The Des Moines Register talked with a half dozen employees who were fired and paid nearly $300,000 in settlements to keep the details of their firing secret.  Branstad says he knew nothing of these deals and only learned about them when the newspaper published its story March 17.

“This ill-advised clause in a settlement in contrary to the priority of this administration to be open and transparent.  It is unacceptable,” Branstad says. “Iowans expect more from government. Iowans deserve better.”

“That’s why I did the executive order,” Branstad says. “I wanted to make it abundantly clear by executive order it’s illegal and if this ever happens again, there are going to be heads rolling.”

Branstad is resisting the idea of hiring a special prosecutor to investigate the secret deals, something Democrats in the legislature have suggested.

“I have no indication there’s any violation of Iowa law,” Branstad told reporters this morning during his weekly news conference.

Branstad has ordered that all employee settlements be posted online so any citizen can see them.  Branstad was on vacation last week but when he returned the governor met with the head of the Department of Administrative Services, the agency that had the most secret settlements with fired workers. Branstad said that agency’s director, who came from the private sector, thought he’d “done a really good job” in reorganizing the agency by using confidential settlements to get rid of some employees.

“The point that I made to him was, ‘I’m not second-guessing your decision to reorganize and make your department more efficient. What I think was wrong was when you agreed to confidentiality and that opened you to these political accusations,'” Branstad told reporters. “And that should never have happened and it has no place in state government.” Branstad says confidentiality agreements were used in “previous administrations.”

Since Branstad returned to office in January of 2011, the largest secret settlement went a pharmacist at the Iowa Veterans Home who was paid a lump sum of $110,000 as she exited her job.