You are here: Home / Agriculture / Borlaug statue unveiled at the U.S. Capitol (audio) 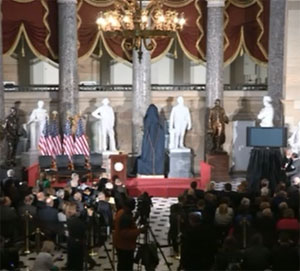 The Borlaug statue draped in a blue cover prior to the unveiling.

The statue of the Nobel prize winner Norman Borlaug of Cresco was unveiled today  in a ceremony at the U.S. Capitol.
Audio:  Dar Danielson Borlaug report.  :60

House Speaker John Boehner presided over the ceremony that included music by Iowa opera singer Simon Estes. Boehner says every once in awhile, someone comes along who truly changes everything, and Norman Borlaug was such a man. He says Borlaug’s work to feed the hungry saved at least one billion people.

He went on to talk about Borlaug’s humble nature and how Borlaug didn’t believe it when his wife told him he had won the Nobel Prize. “It will be my honor to accept this statue on behalf of the American people,” Boehner says. “And I for one, will think it’s awfully nice to have a miracle worker around here.” Boehner was one of the U.S. Congressional leaders who spoke at the ceremony.

Iowa’s Governor and members of the congressional delegation were also on hand for the unveiling on the 100 anniversary of Borlaug’s birth. Iowa Congressman Tom Latham talked about his background in the family seed business and Borlaug’s contribution. “Throughout my entire life I’ve seen people involved in plant breeding. Norman Borlaug was genius,” Latham says. “He was someone who understood genetics, and just as importantly, someone who understood the selection of varieties once he made the cross.” 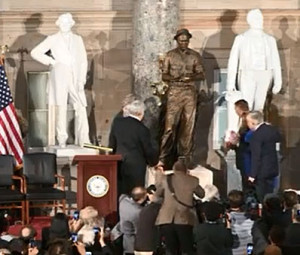 Latham says Borlaug’s accomplishments are much more impressive when you consider the way plant breeding is done today. “In the modern laboratories and seed labs we have all kinds of technology. When Norman Borlaug made his breakthroughs, it was all done with genius himself personally — picking those varieties out of thousands and thousands,” Latham says.

Iowa Senator Tom Harkin, says Iowa has long and proud line of people who have fed the world. “People like Herbert Hoover, Henry C. Wallace and Henry A. Wallace and first and foremost, Doctor Norman Borlaug,” Harkin says. “When I think of doctor Borlaug’s achievements I’m reminded of those famous words in the book of Proverbs: ‘where there is no vision, the people perish.’ More than a half a century ago, Dr. Borlaug surveyed a world where starvation and malnourishment were rampant, and he a vision. A vision of a green revolution.”

Iowa Senator Chuck Grassley says Borlaug’s work not only impacted developing countries, but his stamp can also be seen in developed countries. “Now, his legacy and pioneering work will be on display to educate and inspire the millions of people who come here to  visit the United States Capitol. Dr. Borlaug will continue to inspire generations of scientists and farmers to innovate and lift those mired in poverty,” Grassley says.

Kenneth Quinn worked with Bourlaug for 10 years at the World Food Prize Foundation, and led the statue committee. “What I found was, he was the most humble, hardworking and inspirational person I have ever met,” Quinn says. Quinn says the idea of the statue for Borlaug was born in 2007 as Borlaug stood on the same spot in Statuary Hall of the capitol after receiving the Congressional Gold Medal.

Borlaug, who died in the fall of 2010, developed higher-yielding, drought-resistant varieties of wheat that are credited with saving billions of people from starvation. His  likeness  replaces the statue of a Civil War-era hero from Iowa. A sculptor from South Dakota created  the statue of Borlaug at work  taking notes while standing in a field of wheat.