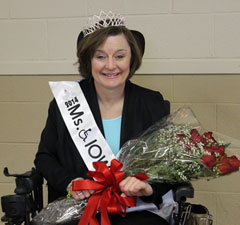 The central Iowa woman who was crowned the new Ms. Wheelchair Iowa earlier this month in Iowa City is unveiling her platform. Michele Meadors, of Des Moines, was left paralyzed from the neck down following a car accident in 2011. She plans to focus her efforts on making it so anyone, no matter how serious their disability, can live independently in a community setting.

Meadors says, “I found out how incredibly difficult it was finding housing that was adapted to the things that I needed, accessible transportation, accessible banking.”

The 46-year-old was appointed by Governor Branstad to serve on the State Independent Living Council. Meadors says she’s spending a lot of time lobbying at the Statehouse for a bill that would more closely regulate the “call buttons” gas stations use to enable a person with a disability to have their gas pumped for them. She says, “In the old days, there was always a gas pump attendant and now that they’re bigger and better, it isn’t necessarily a good thing, especially for somebody with disabilities.”

She says people in wheelchairs, the blind and the elderly all face similar problems in that they’d often like to live independently but facilities just aren’t as accommodating as they need to be — with wider doors to facilitate wheelchairs, for example. Nursing homes can cost hundreds of dollars a day, she says, while robbing a person’s sense of freedom. Meadors says, “Being able to have loved ones or care staff like I have in an apartment or in a setting in the community, it’s cheaper in the long run but still gives those individuals the ability to feel independent.”

Meadors will represent Iowa at the Ms. Wheelchair America event in Long Beach, California, in August.