You are here: Home / News / “Raise the Wage Iowa” launches 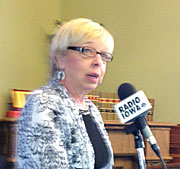 A coalition of over 20 groups intends to stage a “long-term campaign” in support of raising the minimum wage.

“In the upcoming weeks and months we’ll be taking our fight to the streets,” Iowa Citizens Action Network executive director Sue Dinsdale said Monday at a statehouse news conference. “Today is just the beginning.”

Matt Sinovic, executive director of Progress Iowa, said Thursday, May 1st will be a “statewide day of action declaring, ‘May Day’ for Iowa workers.”

The groups support raising the state and federal minimum wage to $10.10 an hour. Mike Coverdale, former owner of a quilting production facility that employs 10 in Nevada, spoke at Monday’s news conference. He told reporters he paid his workers more than twice what the current minimum wage is.

“Sometimes we heard complaints about the cost of our products…but I would respond that our products are handmade by United States of America workers who are paid a living wage and most people are o.k. with that,” Coverdale said.

Connie Ryan Terrell, the executive director of the Interfaith Alliance of Iowa, says public opinion is on the side of those pushing to “raise the wage.”

“Three-fourths of Americans support raising the minimum wage, including 58 percent of Republicans. Simply stated: this is not a partisan issue,” Ryan Terrell said.  “It is an issue of fairness and justice.”

Linda Stockbauer of Des Moines worked a series of minimum wage jobs until she reached the age of 62 and had to retire for health reasons.

“What I found out when I was working when I was younger was the less you got paid, the harder you had to work,” she said.

A bill to raise the state minimum wage is no longer eligible for debate in the Iowa legislature this year. The groups plan to hold public events throughout the summer and fall to press Iowa’s congressional delegation to vote to raise the federal minimum wage.